The Triumph of the Immaculate Heart 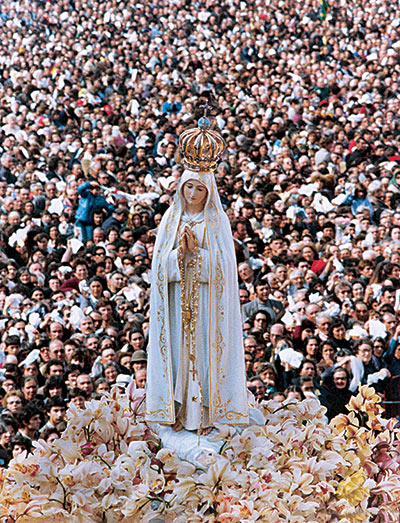 Saint Maximilian Kolbe and Saint Louis de Montfort both affirm that the blessed reign of the Sacred Heart of Jesus will be preceded by the reign of the Immaculate Heart of Mary. At Fatima, the Immaculate herself assures us that in the end her Immaculate Heart will triumph. However, this assurance of Our Lady finds its scriptural basis in the prophecy pronounced by God Himself: “… and she will crush your head” (Gen 3:15). This article intends to analyze this old prophecy in the light of the Fatima message, with a consideration of its present day implications.

In this series of articles we have been exploring how the Fatima message—revealed to three shepherd children in a series of apparitions, first by the Angel and then by Our Lady, between the spring of 1916 and the famous apparition of October 13, 1917 with the “miracle of the sun,” and further elaborated in following years to Sr. Lucia through subsequent apparitions—constitutes for us a catechesis on the intimate union between the Sacred Heart of Jesus and the Immaculate Heart of Mary, which we have referred to as “the alliance of the Two Hearts.”

Specifically, the Fatima message underscores Our Blessed Lady’s irreplaceable role in salvation history at Jesus’ side as His principal cooperator in the work of the Redemption. She was involved from the first instant of Christ’s Incarnation— the Eternal Word took flesh and blood in her virginal womb—right up through His Passion and Death on the Cross— where in union with Jesus’ selfsacrifice, as the Coredemptrix, she offered her Son to the Father and herself in union with Him for the redemption of the human race. It was from the Cross that Jesus  entrusted to her, as Mother of the Church, all those for whom He shed His Precious Blood.

The Fatima event was a recapitulation of the message of the Gospel, in language and signs that could be readily grasped by the three seers, Jacinta, Francisco, and Lucia and a powerful admonition to repentance to all humanity. The message comes directly from the Sacred Heart of Jesus by way of the mediation of the Immaculate Heart of Mary. Clearly, the Lord wants us to experience the tender mercy of His Sacred Heart through the Heart of His Mother. Among other things, He wants us to know that hell is real and that it is a real possibility for all of us, contrary to much erroneous contemporary theological speculation, confused thinking and—unfortunately—at times confused preaching. Our Lady showed in the most vivid way to the three children the horrible fate of unrepentant sinners, falling like snowflakes into the turbulent and fiery pit, and told them that many souls go there because they have no one to pray and make sacrifices for them.

My hope is that these brief reflections have shown that the Fatima event provides us with a very clear lesson on Our Lady’s role as Coredemptrix and Mediatrix of grace. She who is the principal human collaborator in the Redemption invites us also to participate in the work of our Redemption. The Fatima event vividly illustrates Our Lady’s ongoing role as the Coredemptrix, a title expressing her unique role in the Redemption, always secondary and subordinate to that of her Son and entirely dependent upon Him, but nonetheless totally unique and willed by the Father. Her active participation in Christ’s saving work spans the entire period from the Incarnation until the end of the world when the last of her children shall be received into the Eternal Beatitude. At the same time, the Fatima event also instructs us about the crucial importance of our role in the Redemption (i.e., as “coredeemers,” with and through Our Lady), which begins with our baptism and is constituted by the prayers, works, joys, sacrifices and sufferings that we offer for our salvation and that of the whole world.

If my requests are heeded, Russia will be converted, and there will be peace; if not, she will spread her errors throughout the world, causing wars and persecutions of the Church. The good will be martyred, the Holy Father will have much to suffer, various nations will be annihilated. In the end, my Immaculate Heart will triumph. The Holy Father will consecrate Russia to me, and she will be converted, and a period of peace will be granted to the world.[1]

There is no question, then, about the ultimate triumph of the Immaculate Heart. The only question is when, and that is a question that we can help determine. To the extent that we accept and live those moral obligations connected with the message of Fatima, which Sister Lucia refers to as the “Calls” of the Message of Fatima, we will hasten that triumph. That is our insertion into the “Alliance of the Hearts of Jesus and Mary.” Sister Lucia puts it this way:

Mary was chosen by God to be the Mother of his Son—the Mother of Jesus Christ—and the Mother of His Mystical Body, the Church, which is her spiritual progeny. When He was dying in agony on the cross, Jesus gave her to us all as Mother, in the person of St. John: “Behold your Mother” (Jn 19:27). We are the children of the suffering and bitterness of the heart of Jesus Christ, and of the heart of His Mother, and ours. It is for this reason that all suffering united with His, completes our dedication and commitment to God and contributes to the salvation of our brothers and sisters who have gone astray.[2]

To the extent that we ignore those calls, we will retard that triumph. The beginning of the conversion of Russia was delayed for many years because of inaction regarding its consecration to the Immaculate Heart of Mary. Our Lord Himself said to Sister Lucia:

Like the King of France, they will repent and do it, but it will be late. Russia will have already spread her errors throughout the world, provoking wars, and persecutions of the Church; the Holy Father will have much to suffer.[3]

The King of France referred to was Louis XVI who consecrated his kingdom to the Sacred Heart of Jesus in his prison cell in 1792, before he was led off to the guillotine.[4]

As we have seen, the message of Fatima was also a prophetic foretelling of significant world events, some of which have yet to unfold. In particular, much suffering was foretold, for the Holy Father, the Church, and for humanity. In particular, the spread of “Russia’s errors” (all the ills stemming from the false ideology of atheistic Marxist communism) was foretold as the fate the world would suffer if it did not heed Our Lady’s repeated requests for prayer, penance, and sacrifices. The Second World War was foretold and came to pass. The Third Secret of Fatima, revealed in the Jubilee Year 2000 describes an apocalyptic scenario which is quite evidently still being lived in many parts of the world. Nonetheless, the ultimate conclusion of the Fatima message is one of great hope for humanity: Our Lady has told us, “In the end my Immaculate Heart will triumph.” This unconditional promise offers us a message of hope, a ray of light in a darkening world, but it remains for us to appropriate it. Our Lady’s Immaculate Heart will triumph with or without us, but, if without us, it will be to our shame and possible eternal damnation. Rather, this proclamation of the victory of the Heart of Jesus through the Heart of Mary should spur us on to respond generously to Our Lady’s requests with our own personal contribution of prayer, penance and sacrifice for the salvation of souls, in the confidence that our spiritual works offered through the Immaculate Heart will not fail to bear fruit, despite all that may appear to the contrary. The Triumph of her Immaculate Heart, which will usher in a new era of peace and the spread of Christ’s reign, may be much closer than any of us would imagine. As Our Lady indicated to the three shepherd children, much depends on our response.

Finally, I am personally and profoundly convinced that there is a fundamental prerequisite for the triumph of Mary’s Immaculate Heart: the recognition, celebration, proclamation in teaching and preaching and the solemn (dogmatic) definition that Mary—already acknowledged as the Immaculate, Ever-Virgin Mother of God, and gloriously Assumed into Heaven—is also the Coredemptrix, Mediatrix of all graces and Advocate for the people of God. This is clearly and repeatedly illustrated in the Message of Fatima, and Mary’s Heart is the most perfect symbol of this role, which God has given her in union with the Redemptive mission of her Son. This, I believe is the specific meaning of what Blessed Jacinta Marto was expressing when she said: “Tell everybody that God grants us graces through the Immaculate Heart of Mary; that people are to ask her for them; and that the Heart of Jesus wants the Immaculate Heart of Mary to be venerated at his side.”[5]

[2] Sister Lucia, O.C.D., “Calls” from the Message of Fatima, (Fatima: Secretariado dos Pastorinhos, 2002) authorized by the Congregation for the Doctrine of the Faith, pp.178-179.