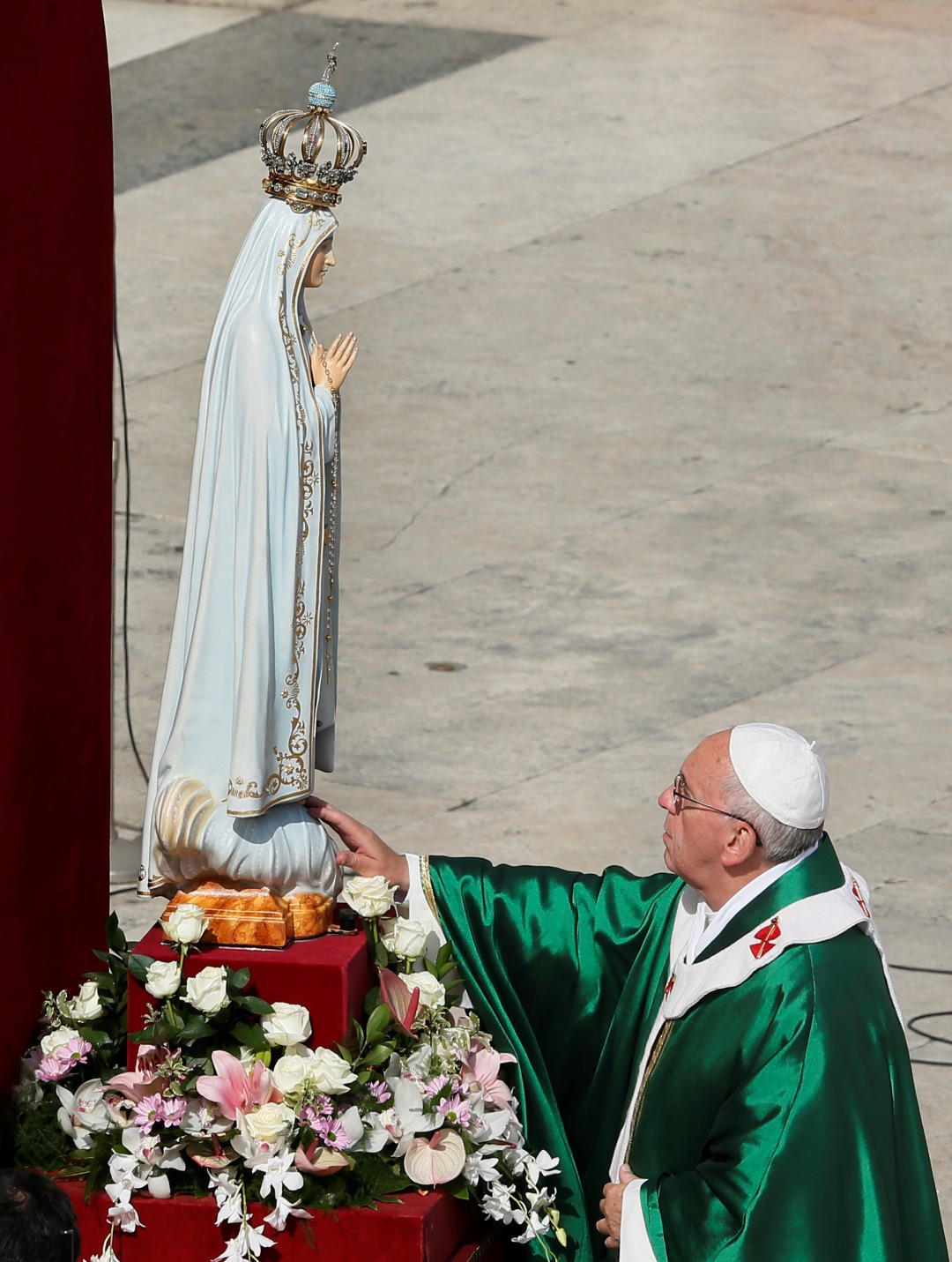 At Fatima, Our Lady indicated her desire for reparation and consecration to her Immaculate Heart, but why? A correct reading of the July apparition at Fatima gives us insight into the great efficacy of Mary’s mediation, and helps us better appreciate the request for devotion to Mary’s Immaculate Heart. Expressed principally through consecration and reparation, this devotion by which the world is to be saved will allow us to receive the full benefits of Mary’s mediation. 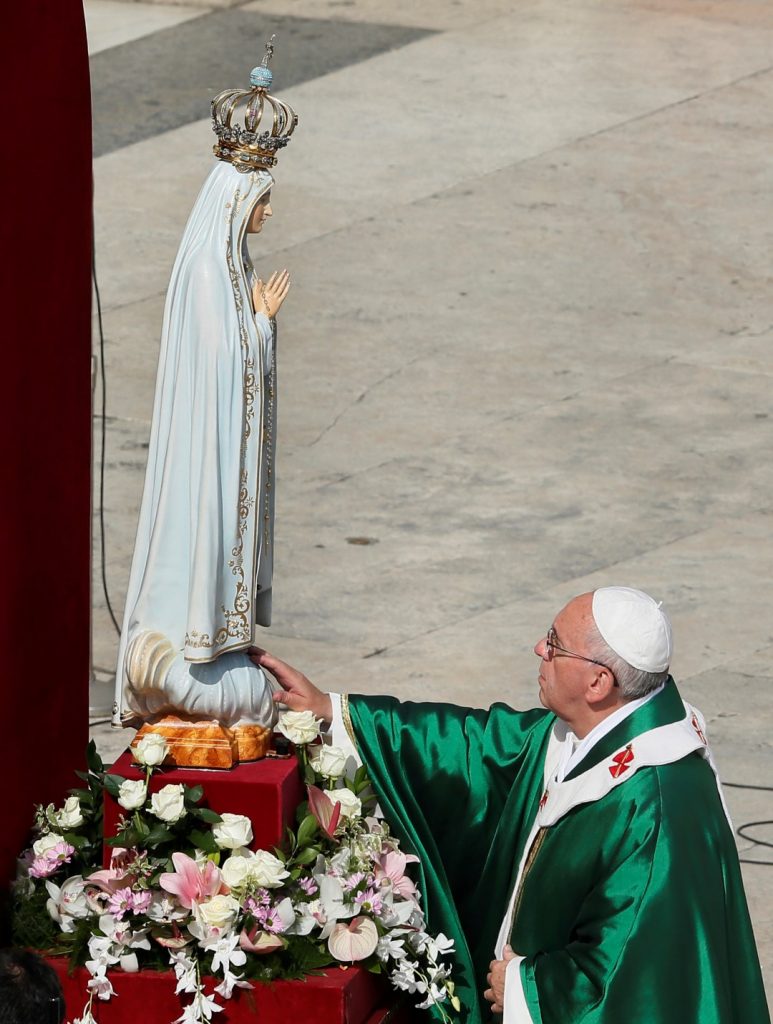 The opening of Our Lady’s hands on July 13, 1917 was perhaps the most conspicuous illustration of the mediation of her Immaculate Heart. Here is Lucia’s narration of Mary’s exhortation and revelation on that occasion:

“Sacrifice yourselves for sinners, and say many times to Jesus, especially whenever you make some sacrifice: ‘O Jesus, it is for love of You, for the conversion of sinners, and in reparation for the sins committed against the Immaculate Heart of Mary.’

As Our Lady spoke these last words, she opened her hands once more, as she had done during the two previous months. The rays of light seemed to penetrate the earth, and we saw, as it were, a sea of fire… Terrified and as if to plead for succor, we looked up at Our Lady, who said to us, so kindly and so sadly:

‘You have seen Hell where the souls of poor sinners go. To save them, God wishes to establish in the world devotion to my Immaculate Heart. If what I say to you is done, many souls will be saved and there will be peace. The war is going to end, but if people do not cease offending God, a worse one will break out during the pontificate of Pius XI. When you see a night illumined by an unknown light, know that this is the great sign given you by God that he is about to punish the world for its crimes, by means of war, famine, and persecutions of the Church and of the Holy Father.

To prevent this, I shall come to ask for the consecration of Russia to my Immaculate Heart, and the Communion of reparation on the First Saturdays. If my requests are heeded, Russia will be converted, and there will be peace; if not, she will spread her errors throughout the world, causing wars and persecutions of the Church. The good will be martyred, the Holy Father will have much to suffer, various nations will be annihilated. In the end, my Immaculate Heart will triumph. The Holy Father will consecrate Russia to me, and she will be converted, and a period of peace will be granted to the world.’”[1]

This July 1917 apparition manifests the great efficacy of the mediation of the Immaculate Heart of Mary. I shall try to enumerate some of the most important characteristics of this mediation.

We note again, as in previous articles, the opening of Our Lady’s hands and the light streaming from them. Now there is a new development: the light from Our Lady’s hands penetrates the earth to the point of revealing Hell to the three terrified children. Not only does this horrifying revelation come about through Our Lady’s mediation, but that same mediation sustains them and keeps them from dying of fright as they look instinctively to her for help.

Then let us note that she tells the children that God wants to establish devotion to her Immaculate Heart as a means of preventing people from falling into Hell. Thus, as she collaborated in the work of redemption during the earthly life of Jesus, in actu primo, God now wants her mediation in actu secundo, that is, in the distribution of graces merited by Christ in His sacrifice on the Cross. That she is empowered by God to mediate for us is seen precisely in this, his desire that we practice devotion to her Immaculate Heart, in order to save souls from Hell. Thus, it is a sort of cooperative mediation in which we become subordinate co-redeemers with the Coredemptrix, requiring our participation in obtaining graces through Mary’s maternal mediation. If people accept this Gospel call to conversion and act on it with recourse to the Immaculate Heart of Mary, “many souls will be saved and there will be peace.” If, however, “people do not cease offending God, a worse [war] will break out during the pontificate of Pius XI.” To prevent the evils which will come upon an unrepentant world, Our Lady says that she will come to ask for two specific acts of devotion to her Immaculate Heart: consecration and reparation. The consecration in question is that of Russia and the act of reparation is the Communion of reparation to the Immaculate Heart of Mary on the First Saturdays.

Furthermore, by freely entrusting or consecrating ourselves to Our Lady’s Immaculate Heart, that is, by putting ourselves totally at her disposal, we continue to collaborate in the work of the distribution of the graces of the redemption. Our conscious acceptance of Mary’s guidance then becomes a positive force in the work of saving souls, our own and those of others. Just as God in the strict sense did not need Mary’s collaboration, but chose to “need” it, so he chooses to “need” ours as well.

Likewise, the sacrifices and little mortifications which we offer in reparation for the sins committed against the Immaculate Heart of Mary not only aid in our own purification, but in that of our brothers and sisters. Although hidden, they become an efficacious means for channeling the graces of the redemption to those most in need.