The Promise & Our Part in the Plan

Between the Warning & the Promise: Living the Fatima Message

A Centennial Review and Pastoral Interpretation of the Fatima Message

A full-day Marian evangelization event, The Promise & Our Part in the Plan will focus on the integral message of Fatima, Our Lady’s invitation to live the Gospel today.

Commemorating the Centennial of the 1917 Fatima apparitions, the Day Program offers instruction regarding the promised “Triumph of the Immaculate Heart” and Our Lady’s “Peace Plan”—which can be hastened or delayed according to the faithfulness of our response to her requests.

After the spiritually challenging events of the day, conclude the Fatima Centennial with the relaxing Evening Program of dinner and entertainment, including a unique country-style “Musical Celebration of Mary.” 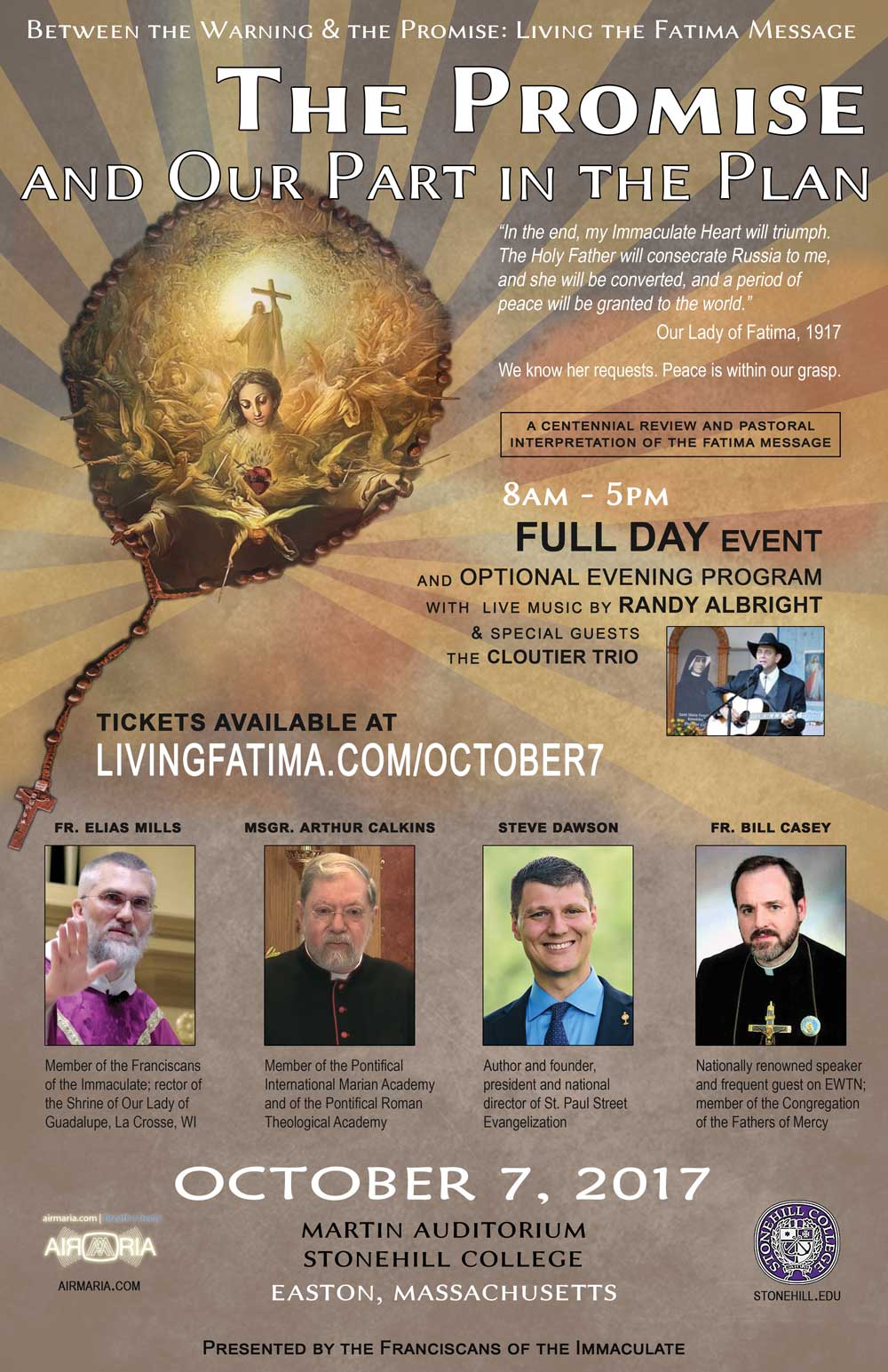 Discounted tickets for GROUPS of 10 or more!

A Catholic college rooted in the vision and mission of Blessed Father Basil Anthony Moreau, C.S.C., founder of the Congregation of Holy Cross.

Ask for SPECIAL RATE on rooms being held for “Our Lady of Fatima.”

Please MAKE RESERVATIONS BY SEPTEMBER 25, to ensure rate and availability.

Activities will range from the spiritual to the intellectual, from the cultural to the social, including:

This relaxing and joyful conclusion of the Fatima Centennial activities will include: 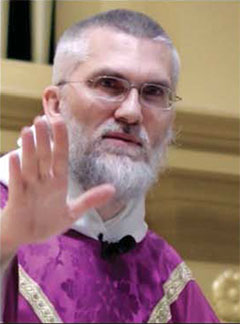 Member of the Franciscans of the Immaculate; rector of the Shrine of Our Lady of Guadalupe, La Crosse, WI 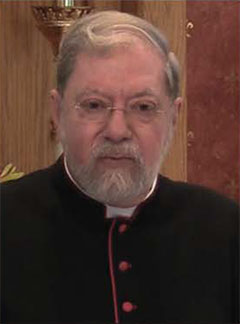 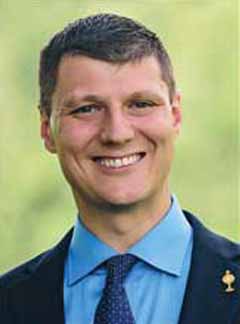 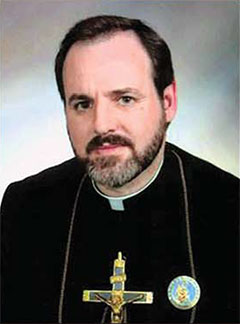 Nationally renowned speaker and frequent guest on EWTN; member of the Congregation of the Fathers of Mercy 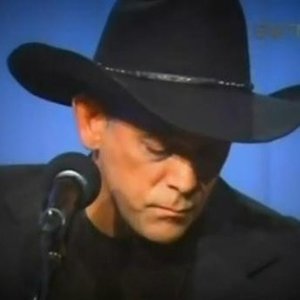 Singer, Songwriter, and Child of Mary. For over three decades, Randy’s songs graced the voices of legendary country music artists like Vince Gill, Alabama, Faith Hill, and many others. Now he writes and sings his songs for the greater glory of Our Lord Jesus Christ in honor of the Blessed Virgin Mary in the service of the Roman Catholic Church. 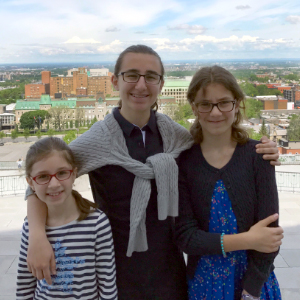 The talented Cloutier sisters are classically trained. With Maude and Marianne on violin, and Mara on cello, they perform as a trio, as well as in orchestral ensembles. Maude recently won the New World Youth Orchestras’ Young Artist Competition, Junior Division. The Cloutier girls are home schooled, devout daughters of Mary.

More About the Event…

The Promise & Our Part in the Plan is the continuation and conclusion of the Franciscans of the Immaculate Fatima Centennial Review: Between the Warning & the Promise: Living the Fatima Message, a series of talks presented in two distinct live-streamed events.

The first event, A Warning & A Plan for Peace, took place in Bloomington, Indiana, on the Centennial anniversary of the First Apparition of Our Lady of Fatima May 13, 2017. The entire live-stream recording of that event is available for viewing on the Franciscan of the Immaculate media site, AirMaria.com.

Learn more about the Fatima Message

The Promise & Our Part in the Plan

Our Lady of Fatima gave several prophecies contingent on our response, several promises which have come to pass, and one definitive and absolute promise of Triumph which is yet to come.

While God sent the Co-Redemptrix to warn us of impending disaster if men did not stop sinning, the definitive note of her message was one of hope:

“In the end, my Immaculate Heart will triumph.”

She came not only to tell us we are on the wrong path and in great danger, but all the more so, to offer us “refuge and the way that will lead to God.” As a sign of the authenticity of the witness of the three shepherd children, she promised a miracle that all could see, and on October 13, 1917, tens of thousands of observers witnessed the “Miracle of the Sun.” She will honor the promise of the Triumph of her Immaculate Heart in the same way, and the resulting glory and peace will surpass any previous moment in the history of humanity.

Our Part in the Plan

The century that has transpired since Our Lady appeared in Fatima in 1917 was the bloodiest in human history. The legislation of many nations condone crimes that “cry out to Heaven for vengeance.” The Christian social and moral order has largely been overturned and is increasingly criticized and ridiculed. The trend shows no sign of reversal, as even the Church is rocked by scandal and the threat of schism. These are all signs that many have not responded to the requests of Our Lady of Fatima.

Just as at Nineveh, where God’s plan of chastisement was prevented by the sincere, collective repentance and conversion of the people (cf. Jon. 3:6-10), so too our world, steeped in sin and warned of impending chastisement, may yet avoid the disastrous consequences of obstinate perversion if we respond with generosity to Our Lady’s call.

We must recognize that the forces shaping the global situation are of a magnitude beyond even the combined power of the world’s nations, and that the effects of widespread evil prevent them from uniting in pursuit of the common good. As the world hurtles along the disastrous course on which it is set, we must remember that “we are not contending against flesh and blood, but against the principalities, against the powers, against the world rulers of this present darkness, against the spiritual hosts of wickedness in the heavenly places” (Eph. 6:12).

At the same time, we can avoid the anxiety and sense of helplessness that paralyzes so many. We simply have to heed the words of Our Lord and “become like children” (Mt. 18:3), and trust in His Mother, to whom we have been given, and who was given to us at the foot of the cross (cf. Jn. 19:27).

What she has asked of us is simple, and can be practiced by almost anyone:

“Do not offend the Lord our God any more, because He is already so much offended. People must amend their lives and ask forgiveness for their sins.”

“Pray the Rosary every day with meditations on the mysteries in order to obtain peace for the world, and the end of the war.”

Offer sacrifices and sufferings for the conversion of sinners

“Sacrifice yourselves for sinners and say many times, especially whenever you make some sacrifice: O Jesus, it is for your love, for the conversion of sinners, and in reparation for the sins committed against the Immaculate Heart of Mary.”

Devotion to the Immaculate Heart of Mary

“You have seen hell where the souls of poor sinners go. To save them, God wishes to establish in the world devotion to my Immaculate Heart. If what I say to you is done, many souls will be saved and there will be peace.”

“Look at my Heart, surrounded with thorns with which ungrateful men pierce me at every moment by their blasphemies and ingratitude. You, at least, try to console me, and announce that I promise to assist at the hour of death, with all the graces necessary for salvation, all those who on the first Saturday of five consecutive months shall go to confession, receive Holy Communion, recite five decades of the Rosary, and keep me company for fifteen minutes while meditating on the fifteen mysteries of the Rosary, with the intention of making reparation to me.”

Be consecrated to Our Lady and wear the Brown Scapular

“In October Our Lord will come, as well as… Our Lady of Mount Carmel.”

With this clear and simple program of conversion and sanctification of life, sacrifices, prayer, penance and reparation, Our Lady has given us the knowledge and power to help save the world. She has already told us what will happen if men ignore her requests, and we have seen that all of her predictions were accurate. Is it not time we take seriously the Fatima message, and begin in earnest to live it?